NAKATOMI INC:
The Amazing Adventures of Tim Doyle
in the World of Limited-Edition Prints 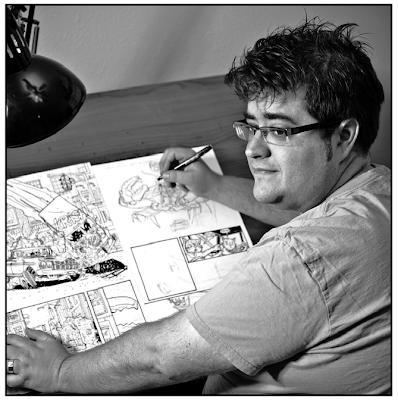 He’s not a robot, no.
He’s not made from the same material
as those giant Transformers he enjoys so much.

But Tim Doyle, ladies and gentlemen, Tim Doyle is a fucking machine.

That’s why the man was able to run three different comic-book stores at once. That’s how he could take the Alamo Drafthouse Cinema’s Mondo Tees store and guide it to become the successful, internationally acclaimed graphic-design venture it is today. And that’s why, post-Alamo, he’s achieving the same thing with his own Nakatomi Inc. while helping his wife raise their son and infant daughter and ride herd on what seems to be a constant flood of stray and/or adopted cats.

Because the short, hefty, raven-haired and quick-witted artist, curmudgeon, and serial entrepreneur is a machine.

“Brenner,” says Doyle, shaking his head, scooting another cat off his busy drawing table. “I’m not a machine. Dude. I’m just as human as you are.”

“Brenner,” begins Doyle, but … is distracted as two more cats, appearing as if from some eldritch portal, grab hold of a still-wet paintbrush.

Of course it’s not just the drive of this man that equals success. No, Timothy Paul Doyle had a lot of raw talent to begin with, yes, he could do certain things with marks on paper, things that resembled the real world at least enough to be recognizable. But that foundation only led to more effort; even that advantage was met with further diligence. Doyle honed his talent over time, producing numerous acrylic paintings of, e.g., Vespa scooters and oldschool telephones and personal friends and pop-culture icons … writing and drawing a daily journal in three-panel comic form, covering every waking day for two years … creating those first movie-based posters when he started at Mondo Tees.

And then came The Interglactic Nemesis. 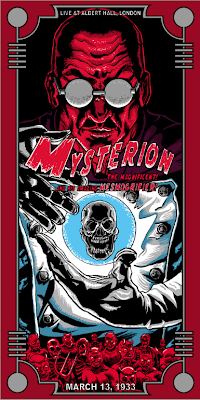 Jason Neulander’s old-timey sci-fi radio serial, performed live by a sharp cast of voice talents (and featuring Buzz Moran on sound effects), was a cornball throwback to the ripping yarns of yesteryear. It was also, Neulander figured while plotting to spread the goofy hit across as many media as possible, perfect for adapting as a comicbook series ~ with the comic-book further adapted as a quasi-animated slideshow, to be projected on a giant screen behind the internationally touring cast.

The adaptations would require hundreds of new, full-color images, dozens of pages of sequential art hewing to the mutated script, and all of it on a tight schedule with deadlines harder than, oh, I don’t know, adamantium?

Doyle was offered the job; he took it and charged right in.

Accommodating that much illustration under those conditions, turning out seven complete issues of around 28 pages each (in addition to collateral graphics) in one year ~ all while making sure Nakatomi remained a viable business ~ was the creative boot camp that pushed Doyle’s drawing and page-composition abilities from yeah, that’s pretty good all the way to Okay: Doyle, Pope, Cooke, Los Bros, ah, I suppose it’s just a matter of what sort of thing one is looking for at the time, y’know?

Seriously: Just look at the pieces included here;
or at the greater variety on that Nakatomi site.

Impressive? Certainly. And yet another reason
for me to shut up and let the man himself do more of the talking … 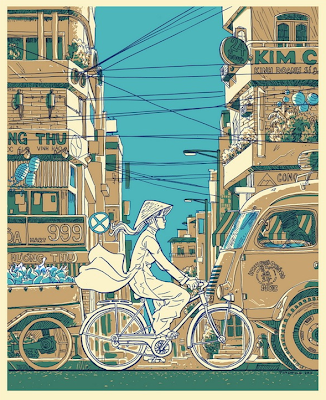 
Brenner: So, above this sentence, that's what I first saw in the Bicycle Prints show at Gallery Black Lagoon: the Vietnam on Wheels poster that seems a bit more, ah, subdued? More subdued than the work you usually do. Tim, what can you tell me about that one?

Doyle: I was really happy with the way it turned out ~ it looks different from anything else I’ve done. And I picked the 16 x 20 size, too, because it’s a size I haven’t worked in before, and it forced me to make a couple of different compositional choices. It’s not out of my wheelhouse as far as the drawing method, but the subject matter is.

I’d just finished a poster for Apocalypse Now, and a couple months before that I’d done a poster for Full Metal Jacket. And I really like the way Vietnam looks, so I was doing a little Googling around, and there’s this Flickr group called Vietnam On Wheels, and I was overwhelmed by all the scooters and bicycles and the different forms of transportation, the three-wheeled motorcarts. And there was an artist out of China, actually, who did this amazing print of Chinese street life, and I was like, “Oh boy, I really want to do that.”

Because I do a lot of cityscape stuff. Like that Reservoir Dogs print, there’s Harvey Keitel and the car and the blood, and it really looks cool, but I’m really into drawing the trainyard and the telephone pole in the background. I just really like city junk.

And Asian countries ~ Vietnam in particular ~ it looks like it’s still on planet Earth, yeah, but it’s just weird enough, y’know what I mean? None of the signs are in English, obviously, but they’re still using the English alphabet, which I guess is from the French influence. But what really gets me is the way their electrical grid is put together, like everything is bolted on and thrown onto these buildings? Like, in America, there’s powerlines everywhere, but we go out of our way to make them not so obtrusive? But looking at the Vietnam streets, it’s like, now that is an electrical accident waiting to happen. And it’s really appealing to me.

Brenner: How has doing comics, sequential art, influenced your compositions
for a single-panel work?

Doyle: A lot of the stuff I do, I kind of try to capture a scene in a story. And when you’re doing comic-books, you have to leave a lot of room for the lettering? Which means you have to make compositional choices about all the breathing space in the background. Like, it can’t just be close-ups of faces, or else the lettering bubbles are gonna wind up on everybody’s forehead. And I think that influenced me a lot, working on Intergalactic Nemesis and having to put in a lot of, I mean, it’s a wordy play, in many regards, so you have to leave a lot of space for word balloons. And when you get away from that sort of thing, you’re like, “Oh, wow, what do I do with all this extra space back here?” And you start drawing the trees and the surrounding environment. And I’m obviously influenced by Geof Darrow ~ I love his stuff so much. And no matter how much detail I put into a panel, there’d be still another detail that Geof Darrow would have put in. His stuff is like a fractal: The closer you get, the more there is to see. A lot of poster artists take the easy way out and just do big portraits, you know, a big essential image. But I’m more interested in setting an environment. 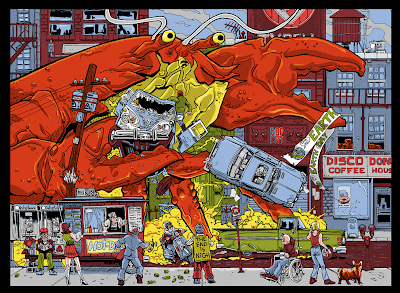 Doyle: It’s graphic design versus illustration, is what it comes down to. I like to think my posters are well graphically designed but still drawn. Something I’ve learned by looking at a lot of comic-book art is that most comic-book artists are not good graphic designers. They can tell a story through art, which is important, but they can’t … like, there can be a guy who does amazing interiors but he can’t draw a cover to save his damn life. Because the cover has to hang together in the way a single panel doesn’t. That’s something I’m learning more and more as I go on.

Brenner: So you’re running a successful business; you’re creating your own works and selling them; you’re commissioning works by other artists and selling those; you’re making original illustrations for some pretty high-profile galleries and venues; you’re making a living doing what you love. Why don’t all artists do this sort of thing?

Doyle: People get this tunnel vision, y’know? Like “I wanna get my artwork out there, and it’s gotta be this specific way,” and they miss all these other opportunities. In the modern marketplace for art and music, the old ways are dying off, and you’ve gotta get with it or else you’re in trouble.

And the pop-culture silkscreen art game, it’s like I helped build that niche through my work over at Mondo. We built this whole collectors’ community. There was a community that was already into buying rock posters, and we took those same artists and had them doing movie posters, and the appeal was so much wider. Because people were like, “Oh, that’s a brilliant poster – but it’s for Phish.” Whereas everybody likes John Carpenter’s The Thing, so if you can get Tyler Stout, who’s a really good artist, to do his take on The Thing, that’s a home run. 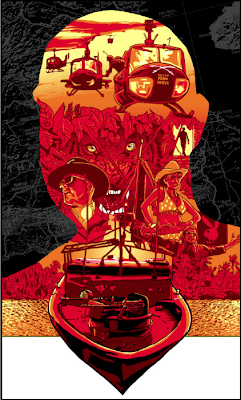 
I’ve got two people working for me. Sean Robb, who used to work for me at Mondo Tees, and Zane Thomas ~ who also used to work at the Alamo. They work part-time, maybe 25, 30 hours a week. Sean, because he’s got a license, does a lot of the errands for me. I can just loan him my truck and say, “Okay, I need this, this, this, and this done today,” and he does that. And when he’s not doing that, he’s printing. And Zane does all the file prep. Like, I do my own color separations when I’m creating a piece, but we do take on print jobs from other artists, so they send the files to Zane and he does all the prep and the printing as well. And Angie [Doyle’s wife] does all the accounting, the customer service, oversees the packing and shipping. And I talk to the artists, make the deals, and do my own artwork.

Brenner: And what time do you start drawing?

Doyle: It varies wildly, depending on what needs to get done. Like, the day before a big release, the day usually starts off with making the blog posts, taking photos, stuff like that. I’ll start drawing anywhere from 7 or 8pm to midnight, sometimes work until 2 in the morning.

I wish I had more time to draw, but there are just so many other details. And I really try hard to promote the other artists on the site, because, y’know, they’re coming to me and I feel I owe it to them to sell the artwork so I can pay them. Which is why I like to work with people who are ~ not that they’re hungry, like they’re poor or they need the money ~ but that they want to make it work. Because there are artists who reach a certain station, where they don’t have to hustle so much? And a lot of artists are pretty terrible at self-promotion. And if they’re not pushing it on their end, sometimes it doesn’t do well. 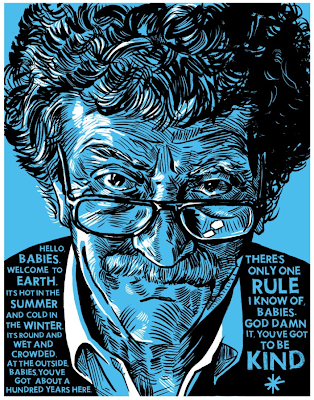 Brenner: And when it does do well, are you and the other artists ~ how to put this other than crassly? ~ are you raking in the dough?

Doyle: Well, here I am, two and a half years after leaving Mondo Tees, and I’ve quadrupled my income over what I was making there.

And all my deals with artists are 50-50. If it’s something I’m publishing of theirs, it’s 50-50. And I take all the financial risk up front. So if they do something really good, it works out great for them.

Brenner: But sometimes it’s right on, too, or else you wouldn’t be where you are right now. Which seems like a good place to be.

Doyle: Yeah, well, it’s not that I want to be famous or anything. But it is good seeing people say nice things about me on the Internet, y’know?

Posted by Wayne Alan Brenner at 10:00 AM